cart0 items
Your shopping cart is empty!
Log in

All orders outside of the United States must be emailed. Please email golby@golbymotorcorp.com to place your international order!

From Wikipedia, the free encyclopedia 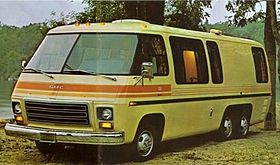 The GMC motorhome was produced by the GMC Truck & Coach Division of General Motors for the 1973 through 1978 model years in Pontiac, Michigan, USA. It was the only complete motorhome built by a major auto/truck manufacturer producing what GMC hoped would be their halo vehicle. Part of the reason this vehicle is so different from other motor homes of the era is that it was not conceived as just a "camper," but as a vehicle for comfortable travel as well. The design was radical for the day with front-wheel drive and a low profile, fully integrated body. At the time (as now), motorhomes were built by recreational vehicle manufacturers on bare frames and drivetrains supplied by a chassis manufacturer. GMC built the bodies and in most cases the interiors in-house, and designed the chassis and drivetrain to create a motorhome enclosure that could be adapted to a range of purposes. Empty shells were supplied to other RV manufacturers for upfitting the interiors and also to specialty manufacturers for a range of custom purposes ranging from mail delivery and mobile training facilities to people movers and ambulances. It was built in 23-and-26-foot (7.0 and 7.9 m) lengths.

Prior to the introduction of the GMC motorhome, a handful of other manufacturers made use of a similar front-wheel drives, which went on to inspire the use in the GMC.[1] These included the Cortez from the Clark Equipment Corporation which initially offered a four-speed manual transmission with front-wheel drive, available from 1963 to 1970 until the division was sold to Kent Industries.[2] From 1971 to 1977, a redesigned Cortez-SD was manufactured, initially by Kent and later a group of investors, using the same Oldsmobile 455 and three-speed automatic transmission as the GMC motorhome would adopt in 1973. Another parallel design was the Revcon motorhome, which starting in 1971 was an all-aluminum body front-wheel drive coach, initially with the same Toronado drivetrain as the later GMC.[3] Beginning in 1978, the Revcon took on a more aerodynamic design similar to the just-canceled GMC motorhome, which included a slant nose and dual rear axle, while adopting a Chevy 454 engine and Turbohydramatic 475 transmission. These were in production through 1990, with one coach built in 1991 using remaining components before the factory closed.[4] 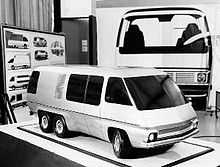 Industry rumors had been circulating for some time that GM was going to be building a motor home. On February 7, 1972 it was made official. About this time the new vehicle was known as the TVS-4, Travel Vehicle Streamlined. The Motor Home design continued to evolve in the two main areas of styling and chassis. The Design Center was continuing with both the external and interior designs. There were twelve designers working with sketches and 1/8 scale (A-scale) clay models. Three or four of these 1/8 scale clay models were made, each with unique design characteristics, each refining their shapes closer to the final form. Once these models were completed, evaluated and approved, full sized drawings were made using 1/4 inch tape to outline the front, rear and side design. These drawings would guide the designers in the next stage: a full size clay model.

The clay full scale 26-foot (7.9 m) motor home was likely the largest clay model GM ever made. Once the shape was completed, the clay surface was “polished” with a sponge and cold water and finished with a silver-blue film of Di-Noc, replicating the painted surface of a vehicle. Upon completion of the full scale clay, plaster cast segments were made of it. Dimensional drawings were made of this final design for tooling and early fiberglass prototype parts for the first prototype bodies. The evolution from the earliest designs with pronounced fender flares, wrap around rear windows and tail lights and other eye-pleasing shapes, drifted toward a still pleasing, but more "manufacturable at reasonable cost" design in the end.

The motorhome had a front-wheel-drive transaxle used in the Oldsmobile Toronado and Cadillac Eldorado with an Oldsmobile 455 cu in (7.5 l) V8 from the Toronado, but the later models made use of the 403 cu in (6.6 l) V8. Both used the GM-designated Turbohydramatic 425 automatic transmission, with a wide chain drive to connect the output of the longitudinally oriented engine to the transmission. The final drive was connected directly to the transmission, and power was fed to the front wheels using half-shafts that ran under the front portion of the engine. The engine was fueled with regular gasoline stored in two 25-US-gallon (95 l) tanks.

The GMC was equipped with front disc brakes and drums on all four rear wheels. A popular owner modification puts disc brakes on a pair, or sometimes all four rear wheels as well. The front-drive configuration eliminated the driveshaft and rear differential and solid axle found on most front-engined motorhomes. As a result, the floor could be designed only about 14 inches (36 cm) above the roadway. The low floor was too low for a rear cross axle, and GM designed the rear suspension as a tandem pair of wheels, mounted on bogies which rode on pins attached to the sides of the low-profile frame. With the exception of the wheel wells, the rear suspension does not intrude into the living space. The rear bogies are suspended using a double-ended convoluted air bag that is pressurized by an automatic leveling system to maintain the designed ride height. The leveling system can also be manually controlled to level the coach at a campsite. The overall chassis design, from the use of an existing GM E platform powertrain and a modified rear suspension has been considered an early ancestor of the crossover. 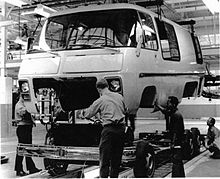 Body construction consisted of a rigid frame made of welded aluminum extrusions. The body frame was mounted on the chassis steel ladder frame using body isolators. The floor was marine plywood, except where it sloped up at the extremities, where they were plate aluminum. The body panels are fiber reinforced plastic (fiberglass) below the waistline frame extrusion and at the ends. The upper side body and roof panels between the ends are sheet aluminum. GMCs are notable for their large expanse of windows, which redefined the RV industry at the time. By avoiding materials that can rot in the body skin and frame of the motorhome, the GMCs retain a reputation as being the most restorable and rebuildable of vintage motorhomes. Many formerly abandoned GMCs have been successfully brought back to life because of the durable design.

They often had luxury features common on upper models of GM brands, such as cruise control, air conditioning, AM/FM/8-track sound systems, an aluminum/fiberglass body, as well as air suspension. The aerodynamic styling, with the wrap around windshield and expansive glass area, gave the vehicle a futuristic appearance.

Rear lower compartments provide space for generators and propane tanks. GMCs were optionally supplied with generators from Onan in 4,000 watts and 6,000 watts, many of which are still in service.

GMC motorhomes in good condition and in proper tune are as efficient as similarly powered modern motorhomes, despite the use of computer-controlled engines on the latter, and typically see 9 to 11 miles per US gallon (21 to 26 L/100 km; 11 to 13 mpg-imp) of regular unleaded fuel. GMC Motorhomes tested via a wind tunnel were reported to have a drag coefficient of 0.31, which is typical of modern sedans (although offset by the large frontal area).

12,921 GMC motorhomes were produced from model years 1973 to 1978. Over 7,000 are currently listed in an international registry. Estimates suggest that at least 8,000 to 9,000 of the original production are still in running condition.

The GMC motorhome enjoys one of the most active user groups of any brand of motorhome ever constructed. By a large margin, more GMC owners are members of the Family Motor Coach Association than any other vintage motorhome. The largest club of owners is GMC Motorhomes International, but about 20 other regional clubs are also active. Rallies are conducted frequently, with two GMCMI rallies per year attracting hundreds of GMC motorhomes.

The GMC motorhome also enjoys an active online presence, with hundreds of owners participating in an active online forum and with a large number of web pages devoted to information on maintaining and updating the GMC.

Many GMC owners have volunteered to appear on a list that makes them available to other GMC owners who experience mechanical difficulties in their areas. The characteristic mutual support of GMC motorhome owners is a reason cited often by new owners for why they picked a vintage GMC over a new motorhome.

Today the GMC motorhome has withstood the test of time and is being rediscovered by a new generation of recreational vehicle owners. The vehicle was built to allow flexible use of the interior, and thus is ideal for recycling for modern needs. Many are today adding new technologies to the drive train and suspension, satellite electronics, digital audio-video equipment, laminate floors and new design upholstery and appliances to make what has been called the "26-foot, 12,000-pound antique hot rod with plumbing."

Several companies specialize in parts for GMC motorhomes, and the strong community has developed a substantial cottage industry for needed replacement and modernization parts. Most parts are still available from GMC or aftermarket suppliers who support muscle-car-era Oldsmobiles, or from suppliers dedicated to specialized GMC parts production.